Can Your Phone Hear Your Conversations? (Yes, But Here’s How) 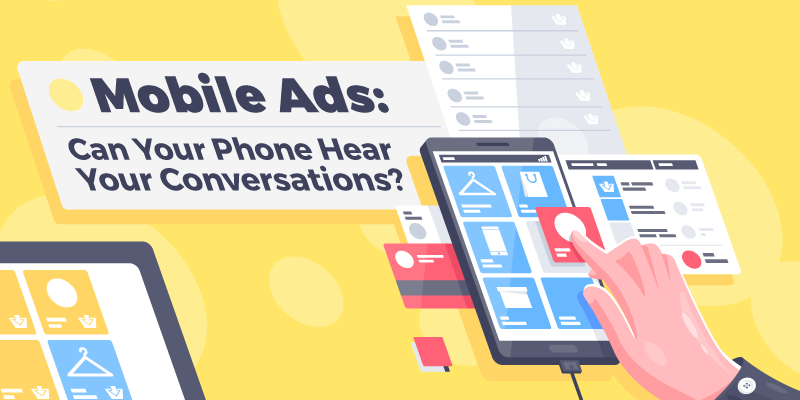 There can be times when you’ve chatted with a friend about a certain item, and then later in the day, you get a targeted ad about it without even searching for it.

You might think, “I was just talking about this. How did my phone know?” The immediate conclusion you may come up with is that your phone is hearing your conversations. But is it really?

Today, we’ll uncover the truth and break down the myths surrounding this issue:

Does your phone listen to you and your real-life conversations?

To give you a clearer picture, let’s take a step back and talk about how online ads are targeted.

Normally, brands get permission from third-party sites like your social networking channels and websites you visit to view your activity on the internet. The data they get ranges anywhere from the cookies you accept to your demographic information (age and location), and more.

That way, they can more accurately target audiences with specific traits, interests, and preferences that they’re looking for, and have higher chances of capturing a lead or converting a sale. There’s been no secret about how ad networks and digital marketing companies use data to serve ads to the best audience, but what if we told you there was more to the picture?

How Advertisers Can “Hear” You

Advertisers don’t need to listen to your phone to get data about you because third-party sites like Facebook and Google already have them. With these sites, they can access the audience’s location, age, interests, and even the websites you’ve visited. Advertisers can utilize a nugget of information and use it to advertise back to you.

Big data, artificial intelligence, and algorithms all work together to target ads efficiently. The more data gathered about your audience, the more precise these campaigns will turn out to be.

Artificial intelligence fuels most (if not all) online marketing tools to automate processes and reduce errors. Each social media channel or ad network has specific algorithms that identify the best size, time, and type of ad to show to a user for maximum effect.

What Major Advertisers and Tech Giants Have to Say

Over the past couple of years, this issue has gained enough traction to compel major tech companies to release statements to the public.

Google has stressed that they do not use ambient noises to serve targeted ads. However, around July 2021, in a closed-door hearing with Indian government officials, some sources say that Google’s employees were listening to their user’s conversations via Google Assistant. According to the report, Google records conversations even if users don’t mention the wake word (“Hey Google,” “OK Google”).

Google disputed this claim and clarified that it doesn’t record conversations without the “Hey Google” trigger. The company directed the audience to its Safety Center website for more details on how Google Assistant works. But, Google previously admitted that its employees listen to “Hey Google” triggered conversations to help improve its speech recognition technology.

Rumors and allegations about Facebook eavesdropping through its user’s phone microphone to listen in on conversations for better ad targeting have persisted over recent years. Be that as it may, Facebook denies this allegation. The company’s 2016 statement clarifies that they show ads based on interests and information you place on your public profile, but not what you’re talking about.

Only Apple has somewhat admitted to this phenomenon, but only when you’re using Siri. They also claim that it’s used for optimization. However, there is no stopping their servers from recording conversations you have when the voice assistant is triggered.

How Exactly Does Your Phone Listen?

So does your phone listen to you and hear you? Yes and no. There are two ways they make use of audio capturing functions of your mobile phone.

Smartphones do pick up audio in your environment, but it’s not the same as actively listening to your conversations unless you activate a voice assistant. Unless you start your sentences with “Hey, Siri,” “OK, Google,” or “Alexa,” there’s no need to worry that your phone could be spying on specific conversations.

If your conversations don’t have any wake words, the data is only processed within your phone. However, these “non-triggered” data can still be accessed by third-party applications on your phone, like Facebook. It’s up to them whether they’d like to use this data or not.

Apps like Facebook and Instagram can have their own set of triggers, but it isn’t easy to define what they are exactly. VICE did an experiment about this and tested if saying a bunch of phrases like “I’m thinking about going back to uni” and “I need some cheap shirts for work” can be used as triggers.

As a result, overnight, the writer saw Facebook ads about “mid-semester courses at various universities and how certain brands were offering cheap clothing.” Based on their experiment, it seemed that their phone was listening, but there isn’t any more substantial evidence to support this.

Advertisers aren’t spying on your specific conversations. Instead, to clue them in on your interests, advertisers are after the audio of TV commercials, movies, and other media you consume.

That, coupled with the information you voluntarily place on your social media accounts, the cookies you accept on websites you visit, and the permission to grant brands, all work together to provide companies with a holistic view of who you are.

Not to say your phone isn’t actively listening to you right now, because it does have that capacity. But at this stage, companies are saying that they don’t use it the wrong way.

How to Stop Brands from Spying on You

Now you know that your phone can pick up sounds, but it’s probably not as malicious as you think. It usually responds to keywords thrown around by yourself or people around you to trigger when it should listen. This could mean activating a voice assistant or granting microphone access. It does not, however, conspiratorially record or listen to all of your conversations and store them in some cloud.

That said, if the idea of your phone actively listening in bothers you, there are ways to ensure that no apps get access to your phone’s listening device:

To stop apps from using your microphone:

To turn off dictation:

To stop apps from using your microphone:

To stop OK Google on Android:

To turn off the Google search app microphone access:

To stop Google from tracking your computer:

That said, these settings are not enough to completely mask your digital footprint. For instance, you should be careful of signing up on any website using your existing social media accounts (such as Facebook), since a typical tradeoff is access to view your public profile info.

It’s Not Just What They Hear

Even if you think you don’t have anything to hide, it’s still important to be mindful of your privacy and data.

While your mobile phones are not actively listening to your conversations, you do leave substantial trails of your identity online, which can explain why those ads are just so spot on. Technology will only get more intelligent, so it’s always a good idea to exercise caution. But in reality, there isn’t much to be afraid of.

Unless you’re dealing with highly sensitive, FBI-level information on a daily basis, the only people who get access to your data are advertisers who use automated tools to run their campaigns more efficiently. It’s just one of the ways for them to know their audience better–and as people have noticed, it works!

Revitalizing your Mobile App: How SEO and ASO Work Together
Read More
A Marketer's Guide on Short-Form Videos and How to Leverage Them
Read More
Top 10 Marketing Tips in the Age of Data Privacy
Read More